- Mr.X. California
Musli Power has been a miracle drug for me. 66 years old, new relationship, took Musli Power Xtra, resulted in extremely hard erection within an hour & after stimulation...effects could be felt 12-16 hours later...usually last for me through the next morning... 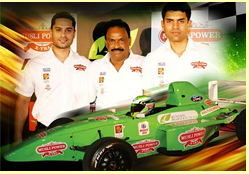 For car racing enthusiasts in the state, it is a dream come true. Though their state of Kerala is a state of sports and auto enthusiasts, it could never aspire to be a player like Gurgaon or Chennai when it came to formula car racing. Forget even plans for a race track, the state didn’t even have a team to compete in formula car racing, which is a younger sibling of the acclaimed Formula 1 format.

But that didn’t prevent Dr. KC Abraham, a Keralite businessman, to boldly go in for his own team when an opportunity presented itself recently. Dr. Abraham is the founder of Kunnath Pharmaceuticals and the patent-holding inventor of Kunnath’s blockbuster ayurvedic performance formulation, Musli Power X-Tra.

Said Dr. Abraham about his decision to create Musli Power X-Tra’s own team in formula car racing, “Beyond our patronage for various sports, ranging from football to cricket to athletics, here was an opportunity that was synergistic with our own corporate goal - of enhancing performance. Formula racing is all about peak performance, as much as our formulation, Musli Power X-Tra is about achieving peak personal performance.”

Dr. Abraham was speaking to Seasonal Magazine after the launch of the team in Kochi recently. The whole team consisting of managers, drivers, and support team was here on 29th January, together with team’s formula racing car.

Said Jose Pottamkulam, racing enthusiast and promoter of M&N Racing who coordinated the team for Musli Power X-Tra, “The synergy was apparent when I informed our chosen drivers Gaurav Gill and Arjun Balu about Musli Power’s support. They told me that since Musli Power Extra was about power, there was great synergy.”

Jose is a long-term racing enthusiast and has some wins to his credit including one in Maruti Suzuki Cochin Autocross, which is a tarmac race conducted in Cochin International Airport.

With his initiative, Dr. KC Abraham has succeeded in overtaking several older home-grown consumer brands in Kerala in bringing a formula racing team to the state.

No effort has been spared by the team in selecting ace drivers for the team.

35-year old Arjun Balu is one of India’s best known rally drivers, and has to his credit winning the AZRC Rally Of China, and has been five times national runner-up. One of his recent wins has been the K-1000 Rally of Bangalore in 2009. Known for his long experience and steady driving, Balu hails from Coimbatore.

Team Musli Power X-Tra’s other driver, Gaurav Gill is one of India's leading rally drivers. The 29-year old from Delhi is a past winner of India's National Rally Championship, National Road Racing Championship and FIA APRC Rally in Indonesia, and is known as an aggressive driver.

Though both drivers are from outside the state, both share a special relationship with Kerala in that both of them have won major motorsports events in Kochi, which is also the headquarters of Kunnath Pharmaceuticals.

Musli Power X-Tra stands to gain much from the formula race, apart from the extensive brand visibility, as it will be working closely with world renowned auto brands like Ford, which is supplying the engines for the two-car team.

Musli Power X-Tra Racing Team will compete in the MRF Formula Championship 2011 which is an official support race to the 2011 Formula One Grand Prix of India.

The race will be held at Chennai and is schedule to start on 5th and 6th of February followed by races on 12th and 13th February 2011, with a total race of six numbers.

The team is also participating in two more races on 29th and 30th October 2011 in Delhi, prior to the Grand Prix.

Musli Power XTra has always been associated with high value sports promotions. Since its beginning, Kunnath Pharmaceuticals has donated substantial amounts to the promotion and development of sports, youth and cultural activities in the nation.

The company is sharply focused on what will take Indian sport ahead, and at helping individuals realize their sporting ambitions.

Musli Power X-tra was the Official Licensee for Health Power in the 2010 Delhi Commonwealth Games. Apart from this, the brand is the main sponsor of the Indian football club, Churchill Brothers of Goa; title sponsor of Sri Lanka based Wayamba Elevens T20 Cricket team; Kerala State Athletics Association, and Kerala based football team Viva Kerala.

Is it coming too fast? Well this is not exactly one of the areas where your coming fast would not helps things. Ain't it? So now is the time to put some break to the speeding jack.

Say take it slow. Someone has said slow and steady wins the race, especially a race involving one million participants. Delay makes you slow down 5-10 times longer. Have it and start going slow within a week and permanently go slow by the end of 3 months course. Fantastic isn't it?
Solution - Musli Power Extra

Why Musli Power? Why? Well, a pill in time saves nine [breakups/divorce]. Musli Power Capsules, is specially formulated by blending various indigenous herbal ingredients than can help you slow down…

Made from natural botanical ingredients, you don’t really need a doctor; you Make your own decision when to go slow. Put the Breaks on and have it with no prescriptions as prescriptions taste yucky.

You are one among the millions, who can’t go slow. Since speed kills it is always better to slow down . What if 25% of men over speed, and imagine within 2 minutes, what a speed. The fun of entry busted as soon as you are in. Take Delay. YOU CAN NEVER LEAVE.
Why do I over speed?

We are used to it. According to an International studies conducted in 2001, men who do not suffer from premature ejaculation, and are able to continue intercourse for extended lengths of time, do seem to have an ability to hold off ejaculation, to a point, Whereas, men with PE demonstrated no control and the factors responsible could be due to pressure, lifestyle and hormones.

How to Control Premature Ejaculations?

PE is a condition which may often land you in an embarrassing situation. So it is essential to be capable to gain control over it. Musli Power Extra Capsules are a sure success way of delaying your premature ejaculation. With the probability of delaying you 5-10 times longer, this herb is one of the most trusted brands in the market.

It’s perfectly normal to use this supplement. Musli Power Capsules supports normal sexual function, by acting on the hypothalamic sensors of the brain that regulate sexual excitement. It’s all in your brain.

A leading aphrodisiac manufacturer, Kunnath Pharma, could review its reported Rs.9 crore sponsorship of Churchill Brothers Football Club a day after its three players were held for allegedly molesting an airhostess on board a Spice Jet aircraft in Mumbai.

'I will be travelling to Goa along with my team to meet Churchill Alemao (chief patron of Churchill Brothers). I want to personally verify the facts, which have been reported in the media. The meeting has been scheduled at 3 p.m. tomorrow (Thursday),' Abraham told IANS by phone from Kerala.

Kunnath Pharmaceuticals manufactures Musli Power Xtra, an ayurvedic aphrodisiac 'formulated from safed musli, widely known as Indian herbal aphrodisiac, which is a complete solution for sexual problems', according to the company's official website.

Following the Rs.9 crore sponsorship deal signed between the company and the club in September last year, the nationally-renowned Churchill Brothers had been officially christened Musli Power - Churchill Brothers, with the players wearing co-branded jerseys.

Abraham said his team would try and get to the bottom of the molestation scandal, which the football club is embroiled in.

'Any decision on the sponsorship (of Churchill Brothers) will be taken after the meeting tomorrow,' Abraham said.

Earlier in the day, Joaquim Alemao, Churchill Alemao's brother and president of the Goa-based football club, told IANS there was no chance of the endorsement deal being called off.

'There is no talk like this. I have not heard anything. When there is no misconduct, where is the chance of endorsements being dropped?' Joaquim, also a cabinet minister in the Goa government, asked.

Three of the club's top players, including star striker Odafa Okolie from Nigeria, were Tuesday accused of molesting an airhostess on board the Spice Jet flight at Mumbai.

Following the complaint, the entire 23-member team, which had boarded the aircraft en-route Kolkata to play an I-league game with West Bengal giants Mohun Bagan, was offloaded at the Mumbai airport and criminal charges filed against the three accused.

According to a report in the daily newspaper Deshabhimani, Musli Power of Kunnath Pharmaceuticals will sponsor Viva Kerala in the coming season. The Keralite pharma company and its product were the sponsors of Goa's Churchill Brothers during the last season. According to the article, the MD of Kunnath Pharmaceuticals K.C. Abraham, and P. Bhaskaran of Viva Kerala confirmed the deal. As per the newspaper, an official announcement will be made coming Saturday.

Meanwhile in Mayyil, the team continues preparing for a long season under the guidance of A.M. Sreedharan.

The blend of Ayurvedic and modern medicine technology, Musli Power X-tra, has finally cleared all the toxicity tests and trails conducted to authenticate their effectiveness and safety. Developed by Kunnath Pharmaceuticals, these herbal capsules are made from time tested herbs, which help cure various sexual dysfunctions in both males and females.

The trails included the analysis of metal content, levels of toxic compounds if any and tests on the effectiveness of the capsules as well. The result has declared Musli to be a 100% herbal medicine and thus, is safe for consumption.

It has been proved by the study that the medicine has no toxic components and is therefore harmless for the liver, spleen, nervous system, pancreas and the circulatory system too. The presence of heavy metals like lead, mercury, arsenic and cadmium is also below permitted levels in the capsules.

Follow us on facebook
musli power news
Musli Power X-Tra Said to Improve CD4 & Hb Counts in HIV Patients
Musli Power X-Tra, the blockbuster Ayurvedic formulation, which has been caught in a few controversies, has proven to be of use in bettering certain critical blood counts in patients infected with HIV+, the precursor to AIDS, a preliminary study from Kerala has claimed.
More
recent notifications